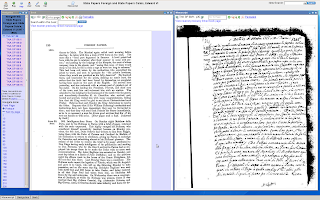 We're pleased to announce that we have today launched a range of usability improvements to MEMSO which we hope will augment the speed and ease with which users can access the resource. The key change that users are likely to notice is dragging and dropping images, and more fine-grained zooming and image control. This change should make arranging images in an optimal way for your screen easier and faster. We have also introduced a range of changes 'under the hood', which have also helped us to improve the display of bibliographic data, and clean up various display and interface elements.

This is the first stage in a larger group of new features coming within the next couple of months, which will also see the rolling out of upgrades to a lot of back catalogue titles.

We've also been rolling out a large number of new manuscript images from The National Archives in MEMSO this week, with more being added more or less daily.
Posted by benmoreassynt at 12:18 PM No comments:

Yesterday we added 5 volumes of the Calendar of Stuart Papers held in Windsor Castle and added them to MEMSO. The papers arise from the life of the titular King James III of England, VIII of Scotland, and were in the possession of both Charles Edward Stuart (Bonnie Prince Charlie) and then his brother Henry, cardinal duke of York. In this way they came to be held in the Vatican before finally making it to England in two batches between 1806 and 1822.

The story of the manuscripts' travels is interesting in itself. They came to England in two parts. In 1804 the Prince Regent began the process of buying the manuscripts from the Procureur General of the English Benedictines in Rome. The process of bringing the first group of manuscripts to England, however, ran aground (almost literally) because of the intervention of the Napoleonic War, and the taking by the French of the Italian port of Civitavecchia.(MEMSOlink) A brig of war sent to pick up the manuscripts was rebuffed in July 1806, while the English Consul in Civitavecchia was thrown into a dungeon and threatened with execution unless he revealed everything he knew of English belongings in the city. They survived only because he had managed to hide them, and kept the secret despite the danger to himself. Eventually they were delivered onto a ship travelling to Tunis, then on one to Malta, finally ending the circuitous journey when they reached England in 1810.

The second collection of papers related to the brothers Charles Edward and the Cardinal Duke of York. These, after the death of the duke in 1807, lay in an 'open garret with unglazed windows exposed to rats and mice' for many years, and were considered to be bills and receipts of no value (MEMSOlink). They were discovered there by one 'Dr' James Watson. Described as a 'revolutionary and adventurer' in the Oxford DNB (http://www.oxforddnb.com/view/article/28862?docPos=4), he was a Jacobite, Jacobin, compulsive liar (he falsely claimed to have been a colonel in the American Revolutionary War) and failed businessman who would eventually die in poverty after strangling himself by twisting a poker repeatedly through his cravat. He bought the papers for the cost of scrap paper (170 scudi) in 1816, but, since he didn't actually have that sum on hand, turned to Lord Brougham, a conveniently rich Englishman who happened to be in Rome, and asked for a loan.

Brougham, clearly appreciating Watson's reliability, said he would advance the money only if the manuscripts became his. To close the deal, however, Brougham also sought to persuade Watson that the manuscripts were of no value, that the Prince Regent would destroy the most valuable ones 'viz all those that held up Royal Turpitude to public view' as soon as he got his hands on them, and that he was better to sell them to Brougham so that he could use them to embarrass royalty by publishing them in the Edinburgh Review. Watson balked at this - no doubt having a sense of their true value in England - and instead borrowed the money from James Smith, Watson's friend.

Certainly the papers were far more than bills and receipts, and Watson now began showing them to English notables in Italy, with a view to delivering them to the Prince Regent, no doubt in return for a rich reward. But now the papacy became involved. Realising that an error had been made by letting Watson have the papers, they were placed under guard and the sale declared void. Watson refused a refund of his money, apparently on the understanding that he would assist the cardinal now in possession of the papers with delivering them to the Prince Regent - and thereby still receive his profit. But the cardinal took offence at a letter that Watson has written, and although the prince did eventually send £500 to Italy for Watson's expenses, the cardinal refused to give it to him.

The story did end well for Watson, however, as between 1817 and 1822 he was paid over £3000 to discharge his claims about the papers, a fact that no doubt encouraged his pursuit of other manuscript collections of potential interest in England. Given the extent of Watson's past treasons against England, which included inviting English radicals to rise up in preparation for the Napoleonic invasion, it is perhaps surprising the the Prince Regent was willing to be so generous. Although Watson would die a pauper in London, he appears to have maintained his Jacobin sympathies to the last, and appointed an Italian revolutionary as his executor. (See Oxford DNB, http://www.oxforddnb.com/view/article/28862?docPos=4 for more on Watson's career.

(Image of the Old Pretender from Wikipedia Public Domain image.)

Blogged with the Flock Browser
Posted by benmoreassynt at 12:41 PM No comments: 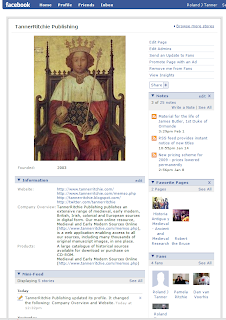 All you have to do it:
and you could win a free ebook valued at up to $40 from TannerRitchie. Winners will be notified weekly.
Posted by benmoreassynt at 11:49 AM No comments:

Material for the life of James Butler, 1st Duke of Ormonde TannerRitchie Publishing now has an extensive collection of records arising from and concerning the life of James Butler, 1st duke of Ormonde (public domain image from Wikipedia), an Anglo-Irish statesman, politician and soldier who played a key part in the history of 17th century England and Ireland.

From 1633 Ormonde played a leading role in Irish affairs, leading the royalist defence against the Irish Confederates after 1641, and becoming Lord Lieutenant of Ireland in 1643, eventually handing over Dublin to the English (and Protestant) Parliamentarians, rather than concede to the Irish (and Catholic) Confederates, in 1647. He fled to Paris in 1648, and became the commander of the exiled Royalist forces and, ironically, of the Confederate forces, who now had common cause with Charles II. When the protestant forces under his command eventually joined Cromwell, Ormonde was left commanding a Catholic force which distrusted him, and which ousted him in 1650, after which he returned to exile in France and Cologne.

At the Restoration (1660) Ormonde was immediately promoted to high office, including steward of the king's household and privy councillor, and was made lord lieutenant of Ireland again in 1661, acting in that role until the accession of James II in 1687.
Posted by benmoreassynt at 12:29 PM No comments: