Biff, bang merrily on high: 700 years of Christmas in MEMSO 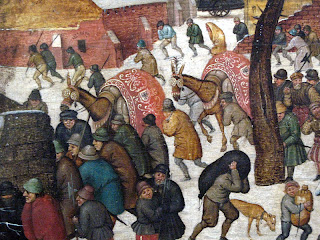 Searching 'Christmas Day' on MEMSO brings up so many interesting stories that picking just one seems somewhat remiss. Just like our experiences today, Christmas was a time of joy and celebration, but it was also a time of tragedy, boozy bust-ups, travel delays, and Scrooge-esque behaviour in the medieval and early modern period. Some of these are events to which we may not be able to relate, while others are reassuringly familiar.

Then, as now, music was an extremely important aspect of the Christmas celebration.

In 1204, King John payed 25 s. to the clerks who chanted Christus Vincut for the royal court on Christmas Day at Argentan.
In 1513, Henry VIII paid 40s. for Gloria in Excelsis to be sung next Christmas Day, while in 1522 Henry rewarded John Senton and other clerks of the college of Windsor for singing before the Princess 'divers ballets etc' on Christmas Day.
But Christmas music was also a dangerous pastime - in 1287, a case of caroling led to a punch-up and the murder of a drunken and libidinous chaplain (in an act of desperate self-defense!).

'On Christmas day ... after sunset there were some men singing outside a tavern. And Hugh [de Weston, chaplain] came by the door immensely drunk, and quarrelled with the singers. Now John [de Quertubus of Scottes Acton] was standing by, singing, and Hugh hated him a little because he sang well, and desired the love of certain women who were standing by in a field and whom Hugh much affected. So Hugh took a naked sword in his hand and ran at John, striking him once, twice, thrice, on the head, and nearly cutting off two fingers of his left hand. And John went on his knees, and raised his hands asking God's peace and the king's, and then ran into a corner near the street under a stone wall. And Hugh ran after him and tried to kill him, so he drew his knife and wounded Hugh in the chest, killing him instantly'

Christmas was also a time of tragedy and war. Sadly, there are too many instances in MEMSO that describe battles being fought, and invasions being led on Christmas Day. Two other tragedies do stand out. In 1763, fire ravished Leslie House, and reduced the house to ruin. From a historical point of view, the loss of the Rothes correspondence is equally devastating - but small mercies can be found in the survival of the Rothes charter muniments, which were thankfully kept with the family's lawyers in Edinburgh. On Christmas Day 1672, a devastating earthquake shook Montserrat, claiming many lives and causing widespread destruction. Both of the region's churches were leveled to the ground, 'and had the people been in the afternoon at church they had been knocked in the head.' Many people were killed, while others miraculously escaped.

For those families, maybe they wished that Christmas Day would simply disappear like it did for the Belgians in 1582. On 22 December 1582 it was suddenly proclaimed in Bruges that it was 'New Year's Day and to be the first of January; so they have lost Christmas Day here for this year'.
Happily, though, there are many references in MEMSO to Christmas being celebrated, with descriptive entries about to the Christmas Mass being celebrated in lavish and public ceremonies and processions in the British Isles and on the Continent. In Protestant England and Colonial North America, however, and despite repeated legislation prohibiting the celebration and observance of Christmas Day, which was considered to be popish and idolotrous and, therefore, "frowned upon by Government as nourishing old supersitions", fines were frewuently imposed on people who decided to observe the day as a holiday. In 1650, for example, 'there was very wilful and strict observation of the day commonly called Christmas day throughout the cities of London and Westminster, by a general keeping shops shut up, and that there were contemptuous speeches used by some in favour thereof'.
Religious divisions in Scotland affected the celebration of Christmas (and New Year) for Mary Queen of Scots in 1562. The Reformation Rebellion of 1559-1560 had not long passed and, although there was a precarious religious settlement, tensions in matters of religion still threatened to erupt into civil war. Mary Queen of Scots observance of Christmas Day in 1562, for example, was a major point of contention. Even though Scotland was now a Protestant kingdom, its queen was still a practising Catholic (albeit in private). The queen's household was a microcosm of this tension. Thomas Randolph reported that while ordinary (ie Protestant) sermons were delivered three times a week, the Queen celebrated mass privately. As a result,

'two so mortall ennemies cane not be nerer yoynede with owte some deadlye blowe gynven ether upon thone syde or thother! One of the Quenes prestes gotte a couffe in a darke nyght, that made some what a doe. Her musitions bothe Scottes and Frence, refused to playe and synge at her masse and even songe upon Chrystemas daye.' ['..two so mortal enemies cannot be nearer joined without some deadly blow given either upon the one side or the other. One of the Queen's priests got a cuff in a dark night that made somewhat ado. Her musicians both Scotch and French, refused to play and sing at her Mass and evensong on Christmas day.' ]

We hope you enjoyed this glimpse into Christmas past!
From all of us here at TannerRitchie Publishing, may we wish all those who celebrate Christmas in particular, and those who celebrate the Holiday Season in general, a very joyous day. And may we wish everyone, a happy, healthy and peaceful 2010.
Detail from Adoration of the Three Wise Men in the snow by
Pieter Brueghel the Younger, Creative Commons Licence
Posted by benmoreassynt at 6:00 AM No comments:

Deck the Dutch with boughs of holly?

The religious divisions of 17th-century Europe could lead to a potential for conflict at the doors of the embassies of Europe. Since embassies were then, as now, tiny islands of a foreign realm within another country, religious practices that were not tolerated outside the embassy - indeed might be violently repressed - could happen behind the embassy doors.

Such an occurrence happened in 1623, when the pope complained to the Venetian ambassador to Rome that, while he did not object to the inhabitants of the Dutch embassy practicing their (protestant) worship in the embassy, he did object to them doing so while their doors were open, so that the ringing of their bells could be heard by the (Catholic) faithful in the street.

The pope went on to describe an event that had happened when he was a nuncio in France. There, the English had objected to the French citizens wanting to decorate their embassy for the feast of Corpus Christi, probably also for religious reasons. After the personal intervention of the English king, the king of France had accepted that the French did not have the right to decorate the English embassy.

But that was not the end of it. The French king instead decided to arrange a deliberately insulting display of the very best Corpus Christi decorations that could be found, carefully placed in front of the English embassy, but not touching it, and thereby he 'received the blessing and applause of his people'.
Posted by benmoreassynt at 11:15 AM No comments:

Christmas Sale - 50% off all downloads

It's that time of year again! Help us celebrate the end of 2009 with another of our phenomenal annual sales. We kept our prices low after the overwhelming success of last year's sale, and now we're offering an additional 50% off all our downloads. Be sure to fill your stocking with historical goodies - sale ends 10 January 2010. From all of us at TannerRitchie may we wish all our clients a very merry Holiday Season, and a happy New Year.
Posted by benmoreassynt at 1:27 PM No comments: