Remember, remember the 5th of November 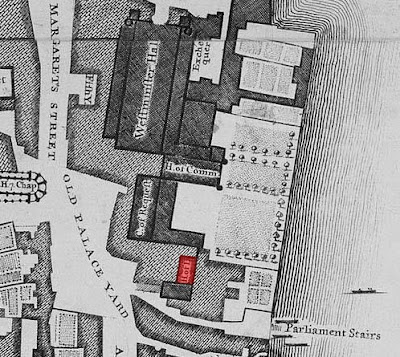 Palace of Westminster in 1605 with House of Lords marked in red. The cellar below stored the barrels of gunpowder. (Detail, John Rocque's map of London, Public Domain image)

Remember, remember the Fifth of November,
The Gunpowder Treason and Plot,
I know of no reason
Why the Gunpowder Treason
Should ever be forgot.
Guy Fawkes, Guy Fawkes, t'was his intent
To blow up the King and Parli'ment.
Three-score barrels of powder below
To prove old England's overthrow;
By God's providence he was catch'd (or by God's mercy*)
With a dark lantern and burning match.
Holla boys, Holla boys, let the bells ring.
Holloa boys, holloa boys, God save the King!
And what should we do with him? Burn him!

On 5 November 1605, during the reign of King James VI of Scotland and I of England, an intricate plot to blow up the Royal family and Houses of Parliament, and everyone in it, was discovered and averted. “Remember, remember the 5th of November...” has not been forgotten to this day. Guy Fawkes and the Gunpowder Plot have been the subject of annual remembrance throughout the centuries. Sermons of deliverance, bonfires & fireworks, ‘Penny for the Guy’, and the modern film V for Vendetta reflect the ex
tent to which this treasonous plot shook the foundations of British society (figuratively, although not - as was intended - literally).
Modern 'Bonfire Night' or 'Guy Fawkes Night' began immediately after the discovery of the plot, with the passing of the 5th of November Act 1605, ordering that 5th of November be kept free for a day of thanksgiving for the failure of the plot.
In Great Britain, Guy Fawkes Night has traditionally centred around an effigy (or "guy") representing Fawkes being ritually burnt on the bonfire. In the weeks before bonfire night, children display a "guy" and request a "penny for the guy" in order to raise funds with which to buy fireworks. Only in Lewes, Sussex, are the older anti-Catholic roots of Guy Fawkes night still on prominent display, where Pope Paul V is still among the several effigies set alight as part of celebrations that also commemorate the Marian persecutions of protestants. In more recent years Guy Fawkes Night has struggled to keep pace with the increasing popularity of Hallowe'en, which was an almost unknown festival (with the exception of Scotland) until the 1970s. 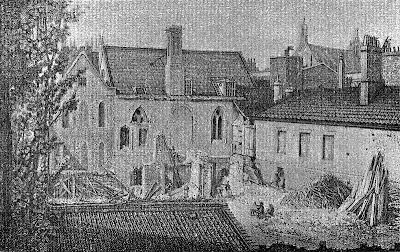 An image of the House of Lords in 1807 (centre building), surrounded by timber and rubble, suggests security measures had hardly improved since 1605.
Although mostly a British custom, Guy Fawkes Night celebrations are found in various places around the world (accompanying the British colonists). For example, students at the University of Toronto in Canada burn an effigy of Guy Fawkes, while the entire festival was banned in Australia in the 1970s because of the danger from fireworks.

An account of the discovery of the Gunpowder Plot, written 16 November 1605

Below is an account from the Venetian State Papers of how the Gunpowder Plot was discovered. One of the most interesting aspects for the modern reader is the realisation of just how lax early modern concepts of security were. The cellars under the houses of parliament had been leased, and there was no security preventing people coming and going around the parliament houses.

The unnamed man in the Venetian account was none other than Guy Fawkes. (Fawkes called himself Guido, after fighting with the Spanish in the 80 Years war, but was christened as Guy). Fawkes was defiant when caught and promised never to give up the names of his accomplices, but after two days of torture he broke and revealed the full list of conspirators. Sentenced to be hung, drawn and quartered, Fawkes avoided the worst aspects of the execution by throwing himself from the scaffold and breaking his neck. His body was nevertheless mutilated and divided, with parts sent and displayed around the kingdom as a warning to others.
Although bonfires were adopted from 1605 to celebrate the failure of the plot, the burning of effigies only became common from 1673 - and at that time the effigy was usually the pope, not Fawkes. The burning of the pope was provoked with heir to the throne James, Duke of York's open adoption of Catholicism, and underlined the essentially anti-Catholic nature of the event through most of its history. Only in the 19th century was Fawkes marginally rehabilitated, both with the religious motivations of his actions being played down, and popular antipathy to parliament and politicians tending to encourage a jokey sympathy with Fawkes, described as "the only man ever to enter Parliament with honest intentions". Astonishingly, he came in at number 30 in a BBC vote of the 100 greatest Britains.


Further details about the Gunpowder Plot and Guy Fawkes can be found on Wikipedia.
Posted by benmoreassynt at 7:47 AM 2 comments: