The curious case of the King of Spain's blue coat

On 21 November 1553 Francisco de Eraso wrote to Prince Philip, future king of Spain, mentioning that a portrait by Titian had been sent secretly to Mary, queen of England, so that she could see his likeness before deciding whether to marry him. Eraso's letter is very specific about the picture that has been sent, describing 'the one with the blue coat with white wolf-skin, which is very good and like you'.

There appear to be two portraits by Titian of Philip II, all dating from around the right time in the 1550s to be the painting referred to in several

letters written in November 1553. The picture sent was said to be 'already old', although it was painted only 'three years ago', and belonged to queen Mary of Hungary. The portrait had suffered already by the passing of time and transportation, but was considered good enough to get a sense of Philip's appearance 'if s

he will put it in a proper light and look at it from a distance, as all Titian's paintings have to be looked at'. Perhaps unusually, the queen dowager made it very clear that the portrait was only on loan to Mary of England, and was to be returned after the marriage 'since it is only a dead thing, when she has the living model in her presence'.

Clearly the description does not tally with the portraits (shown left and right) in existence at this time. The solution, identified by Charles Hope in an article entitled 'Titian, Philip II and Mary Tudor', is found in a reading of the original manuscript of Eraso's letter, where the portrait is described as 'vestido con un sayo afforando con lobos blancos' ('dressed in a furred sayo with white wolfskin'.) There is, in fact, no mention that the coat was blue. A sayo is a distinctive Spanish coat described by a modern dictionary as 'a large wide coat without buttons, any loose coat or dress'. The picture, above right, therefore fits the description well, although Charles Hope suggests that the surviving painting is a studio copy of another version of the same picture that was sent to Mary. In short, Titian probably painted multiple versions of the same image, and one - now lost - version of the 'furred' portrait was sent to England.
Posted by benmoreassynt at 9:42 AM No comments:

How Scottish Flu makes you swell like a bagpipe 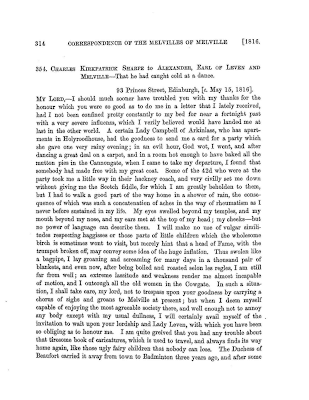 "My eyes swelled beyond my temples, and my mouth beyond my nose, and my ears met at the top of my head; my cheeks - but no power of language can describe them [...] Thus, swollen like a bagpipe, I lay groaning and screaming for many days."

Thus spoke Charles Kirkpatrick Sharpe, a noted Scottish antiquarian, in 1816, when writing to the earl of Leven and explaining his slowness in responding to a letter because of influenza. Much as Sharpe had clearly suffered from his infection, his letter seemed primarily intended to demonstrate his self-deprecating and somewhat crude brand of humour to the earl.

Throughout the long letter Sharpe writes amusingly about his experience, which he blames on overly hot party, and the fact that someone had stolen his coat.

"Lady Campbell of Arkinlass, who has apartments in Holyroodhouse, had the goodness to send me a card for a party ... I went, and after dancing a great deal on a carpet, and in a room hot enough to have baked all the mutton pies in the Cannongate, when I came to make my departure, I found that somebody had made free with my great coat .... I had to walk a good part of the way home in a shower of rain, the consequence of which was such a concatenation of aches in the way of rheumatism as I never before sustained in my life."

The end result was, claims Sharpe, that although "I will make no use of vulgar similitude respecting haggisses or those parts of little children which the wholeseome birch is sometimes wont to visit", his head now resembled that of the Greek goddess Fame (or Pheme), who according to legend had multiple tongues, eyes, ears and feathers.
Despite his lighthearted letter, Sharpe was in fact one of the most learned men of his generation, an editor of volumes for the Bannatyne Club, as well as an artist and connoisseur with a collection that surpassed Walter Scott's in terms of quality: including such famous pieces as Holbein's portrait long thought to be of Margaret Tudor, and eleven of the surviving Lewis Chessmen.

Posted by benmoreassynt at 1:32 PM No comments: