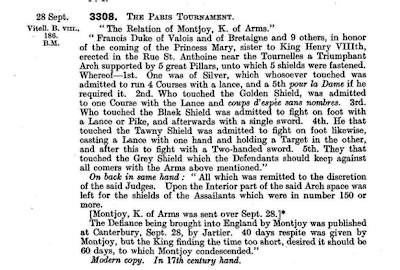 On 28 September 1514, a joust was held in Paris to honour the coming Princess Mary, sister of Henry VIII, who was about to marry Louis XII of France.

The tournament saw a huge archway erected with 5 large pillars, from which were hung coloured shields. By touching the shields, competitors qualified for different types of competition, including running the course with a lance (presumably on horseback), "coups d'espée sans nombre" (endless blows of the sword), fighting on foot with a two-handed sword, and throwing the lance while holding a target (in other words, while others were thowing lances at the competitor). The shields were protected by defendants whose job it was to keep the competitors away at all costs. Meanwhile, all the competitors' own shields, numbering over 150, were hung from the inside of the archway as decoration.

There was considerable danger involved in medieval jousts of this sort, and deaths sometime occurred. The duke of Albany, brother of James III of Scotland, was killed in 1485 during a similar tournament in Paris, when a splinter of wood entered his eye.

Posted by benmoreassynt at 11:14 AM No comments:

Email ThisBlogThis!Share to TwitterShare to FacebookShare to Pinterest
Labels: tournaments and jousts

The disgraceful case of the Vicar of Dronfield, 1633

In daily Twitter updates with extracts from MEMSO, we sometimes come across and entry that's too good to be true. Today's example is the case of Richard Revell, vicar of Dronfield in Derbyshire. The record is really self explanatory, and, apart from being quite funny, is a rather impressive record of disgraceful behaviour for one vicar to build up.

Click on the image to see a larger version
Posted by benmoreassynt at 10:59 AM No comments: